IN THE GRIM DARKNESS OF MAGISTRATSV23C THERE IS ONLY WAR

Chaplain Leonatos finished his sermon before his brothers. Long had they been on this journey, long had this Imperatus Strike vessel been their home. The cramped quarters of the spaceship could have driven normal men mad within hours. But they were not mere men. They were the sons of Sanguinus. This he told himself, this he preached each day. They had been given a mission by Commander Dante himself. Seek out the last survivors of the Lamenters, the only known successor chapter of the blood angels known to have found a cure for the flaw. Find them, bring them back to Baal secundus. Its their last hope, their only hope. Since the third war of armageddon, The Blood angels had withdrawn from most of the galaxy...keeping to themselves.

When Leonatos left his beloved homeworld some 200 years ago, 50-man strong force of marines set upon this quest..They had all been strong, all honorable, the emperors finest even among fellow marines. But slowly...after each battle, after each victory, after each passing year he had watched the "curse" seep into the minds of his brothers. Slowly but nigh unstoppable. The human serfs long dead by old age, only the servitors roamed the lone corridors. The Imperatus Chappel chamber their only sanctity. One by one they had come to him. They came to him with their confessions. Confessions that told of nightmarish dreams that came alive to them even during the waking hours. how they had fought these dreams with faith for years. But how they now felt they were losing. Losing their sanity. Not wanting to be reduced to a ravaging beast thirsting for blood to drink they came to him for Salvation. Adorn my armor in black, let me die a swift death in the emperors name.

Leonatos did what must be done. He had those same dreams. He knew what they did to even the strongest minded marines of the Adeptus astartes.

Now they were few left.. Few left of the still sane. Time was running out. The life spann of an Blood angel gave them long lives. Lives filled with heroic deeds, the stuff of legends, the honor of doing the Emperors will, to die for him. But the nightmares....Long lives of nightmares. Even minds made of ceramic adamantium gets ground down in the blistering sandstorm of the curse.

Now the end was near. The last battle they had found a clue. A barren world infested with orks. Whose war trophies contained pieces of armor with the Lamenters insignia and chapter symbol upon it. It was a great symbol of might for orks to have decimated a chapter so much. Even if it was the horrendously weakened Lamenters chapter. Such things mattered not for an ork. The last Lamenters members were now hunted. hunted by this band of orks. Sturmboss Grogork's Snazzy Sturmband they called themselves. Leonatos was shaking with anger and barely contained himself. Orks, he spat.

They will know the Emperors wrath.

It is time the hunters became the Hunted. 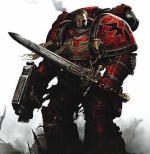